Revisiting and Revitalizing the Niobrara in the Central Rockies 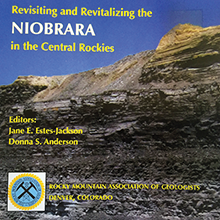 About: This guidebook is intended to be the foremost reference on the Niobrara Formation in the Central Rockies, combining all previously RMAG-published, Niobrara-related material with previously unpublished material. It is organized into four sections. The first section contains previously unpublished material, including a discussion of the Niobrara petroleum system by Steve Sonnenberg (Chapter 1), an overview of recent Niobrara drilling activity by Peggy Williams and Don Lyle (Chapter 2), and a brief summary of faulting patterns in the Niobrara as observed from 3-D seismic data by Steve Siguaw and Jane Estes-Jackson (Chapter 3). In addition, Donna Anderson has compiled a comprehensive list of all non-RMAG Niobrara references in Chapter 4.

Thirteen papers previously published in The Mountain Geologist are organized chronologically in the second section (Chapters 5-17), while eleven papers from various RMAG guidebooks, symposia, and short courses are organized chronologically in the third section (Chapters 18-28). The fourth section of the book contains 18 Niobrara field studies (Chapters 29-46), including a previously unpublished summary on Silo Field by Steve Sonnenberg (Chapter 41).

BE SURE TO LOG IN to receive MEMBER pricing.