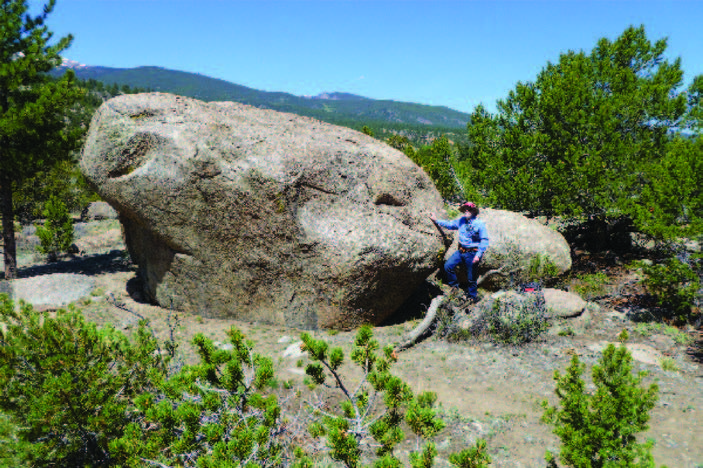 The recently published map of the upper Arkansas River valley region represents the culmination of almost 10 years of effort by the U.S. Geological Survey (USGS) staff, including myself and a wide-ranging crew of talented geologists (Kellogg and others, 2017). Without diving deeply into the geology of the area—that’s covered extensively on our map and in the accompanying pamphlet—I would like to share a few insights into the processes that went into creating the map, as well as to touch on a few of the more interesting geological features of the valley. The map and its accompanying pamphlet can be found online at https://doi.org/10.3133/sim3382.

Our study covers a region that extends almost 50 kilometers from Salida in the south to just north of Leadville, Colorado, encompassing an area of more than 1,200 km2 (fig. 1). The valley is flanked by the majestic Collegiate Peaks to the west and the Mosquito Range to the east. Recreational activities abound in the area, including hiking, fishing, river rafting, biking, and hunting. As more and more people visit the Arkansas River valley, some deciding to stay and live, there is a growing interest and a need for understanding the geological framework of the valley as well as the mining history. Although numerous geological studies over the years have been done in this region, it was apparent that extensive gaps in our understanding of the geology existed. Plugging these holes and creating a unified geological story for the region was a major motivation for the creation of this map. Consequently, after the USGS completed work in the Blue River Valley to the north (Kellogg and others, 2011, 2016), which encompasses the towns of Breckenridge, Dillon, and Frisco, the project moved southward into the Arkansas River valley. 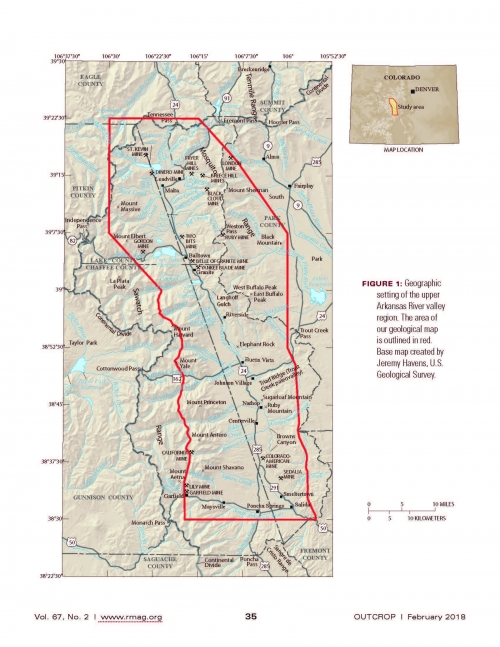 The creation of the upper Arkansas River valley map is part of the overall USGS Rio Grande Basins Project. As we began our work on this project, we soon realized that the geomorphic and structural processes that modified the upper Arkansas River valley and its tributary streams clearly needed additional attention. The recent availability of lidar (light detection and ranging) data, which images the ground surface to greater than 10-centimeter (cm) vertical accuracy, provided a tremendous boost to detailed studies. Lidar data provided a major breakthrough by better defining an array of geomorphic and tectonic features and processes, such as landslides (both active and inactive), the relative ages of glacial features, river terrace development, and fault scarps. New mapping in the more-poorly-understood portions of the map area, aided by both lidar and detailed photo imagery, was undertaken by Ralph Shroba, Cal Ruleman, Bob Bohannon, and myself (all USGS personnel). I have to admit that some of these areas were in stunning mountain environments and it was sometimes hard to believe how lucky we were to work in such beautiful terrain.

The upper Arkansas River valley, similar to the Blue River valley to the north, is controlled by the same extensional normal fault system that defines the northern Rio Grande rift, an intra-continental region of crustal extension. The largest down-to-the east displacements along these faults are along the west side of the Arkansas River valley, indicating that the floor of the valley is generally tipped westward. The faults are divided into northern and southern portions, separated by a bedrock high near the town of Granite, where the Arkansas River flows through a narrow, granite-lined canyon. Strangely, the Arkansas River valley region is seismically quiet. In fact, there is little firm evidence for Holocene (less than 11,500 years old) faulting anywhere in the valley. This in contrast with other regions in western North America’s basin-and-range province, with actively extending crust that has been periodically shaken by major historic and more recent damaging earthquakes.

In the upper Arkansas River valley, people have long been fascinated by the enormous boulders that occupy the younger floodplains (fig. 2). Most of these huge boulders lie on two terrace levels that are contemporaneous with the late Pleistocene Pinedale glaciation, 31–12 thousand years ago. During the Pinedale glaciers flowed down tributary valleys (but did not reach the main valley itself). Another, much older flood deposit (pre-Bull Lake glaciation; older than 640 thousand years), is also recognized. Some of the boulders on the younger terraces are over 10 meters long. According to Keenan Lee at the Colorado School of Mines, these boulders were carried downstream by catastrophic floodwater breakouts that followed damming of the Arkansas River by a glacier that flowed down Clear Creek, about 25 km south of Leadville (Pine Creek, just south of Clear Creek, may also have caused a glacial dam across the Arkansas River). Catastrophic breakouts of the ice dam(s), with estimated discharges as high as 65,000 cubic meters per second (considerably greater than the average discharge of the Mississippi River!), coursed down the valley and deposited enormous amounts of debris, including the huge boulders we see there today.

FIGURE 2: Two views of enormous granitic flood boulders on late Pleistocene terrace deposits. The boulder on the left is about 8 meters (m) long; the one on the right, the largest known flood boulder in the upper Arkansas valley, is about 14 m long (note person on top of boulder for scale).

The precise ages of the Proterozoic basement rocks and the Cretaceous and Tertiary intrusive rocks were only partially known before the start of our study, so a campaign to date a variety of rocks by both the 40Ar/39Ar and U/Pb methods was undertaken by Mike Cosca, Wayne Premo, and Rick Moscati of the USGS and Bill McIntosh of the New Mexico Bureau of Geology and Mineral Resources. These results, along with previously-published dates, provide important constraints on the igneous history of the area, as well as the timing of metamorphic events in the oldest basement rocks (1.78–1.70 billion years old). One interesting result from this dating is the clear delineation of two periods of Tertiary and Late Cretaceous igneous activity (22–45 and 56-72 million years ago), separated by a period of igneous quiescence and relative tectonic stability, during which the widespread Eocene Rocky Mountain erosion surface formed. 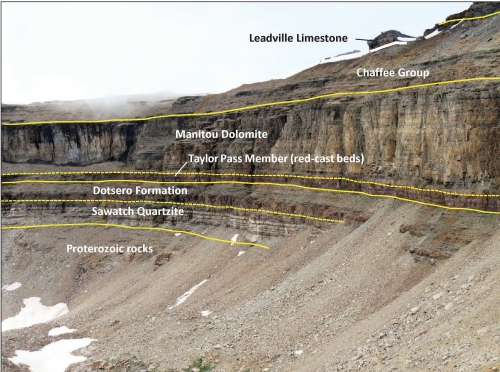 We were fortunate that the Colorado Geological Survey (CGS) was finishing detailed mapping along and to the east of the Arkansas River valley prior to and during our mapping efforts, and we incorporated much of their mapping into our overall map. Among other topics, CGS geologists greatly advanced our understanding of the Paleozoic rocks, which range in age in our map area from the Lower Permian to Middle Pennsylvanian Maroon Formation to the Upper Cambrian Sawatch Quartzite, and for that we thank them. Figure 3 shows a spectacular wall in what is informally called the “Horseshoe Cirque” on the east side of Horseshoe Mountain about 11 km southeast of Leadville. A complete section is exposed in the wall from the Lower Mississippian Leadville Limestone (dolomitic here) down to the Sawatch Quartzite and the underlying Proterozoic basement.

If you have any questions about our map and our work in the upper Arkansas Valley, please contact me at karlkellogg@comcast.net or kkellogg@usgs.gov.