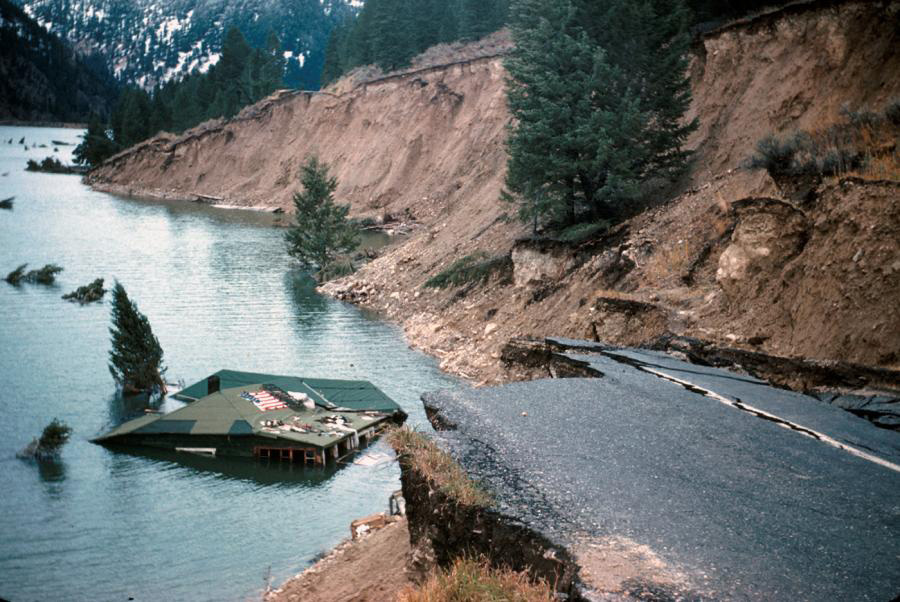 Yellowstone’s world-famous natural history is marked by such colossal volcanic events that their reflections in today’s landscape are difficult to grasp and impossible to take in at just a glance, even for those familiar with the signs of past volcanism.

The features of Yellowstone National Park result from great explosive eruptions and profound collapse of the ground, enormously thick lava flows, uplift and extensive faulting, and the erosive power of flowing water and ice. For more than a century, geologists have discovered and analyzed evidence of the dramatic events that have shaped the land here. When combined with growing knowledge about how volcanoes work and the never-ending motion of Earth’s surface, the evidence tells a remarkable story of the Yellowstone landscape.

The volcanism most directly identified within the Yellowstone region has, during about the past 2 million years, built an immense volcanic plateau that straddles a high mountain divide—the Yellowstone Plateau volcanic field. This volcanic region has evolved through 3 cycles of voluminous outpourings of rhyolite lava and volcanic ash, each of them climaxing with one of Earth’s greatest pyroclastic-flow eruptions and the resulting collapse of a central area to form a large caldera. Other eruptions have poured out basalt lava flows around the margins of the volcanic field. Large earthquakes occur just off the plateau along the nearby Teton and Hebgen Lake faults, the latter of which ruptured in 1959 (Ms = 7.5), causing considerable damage to the region.

Yellowstone’s volcanism is only the most recent in a 17 million-year history of volcanic activity that has occurred progressively from southwestern Idaho to Yellowstone National Park. At least six other large volcanic centers along this path generated caldera-forming eruptions; the calderas are no longer visible because they are buried beneath younger basaltic lava flows and sediments that blanket the Snake River Plain.

The Yellowstone Plateau volcanic field developed through three volcanic cycles spanning over two million years and including two of the world’s largest known eruptions. The >2450 km3 (588 mi3) Huckleberry Ridge Tuff erupted about 2.1 million years ago, creating a large, approximately 75 km (47 mi) wide, caldera and thick volcanic deposits. A second cycle concluded with the eruption of the much smaller Mesa Falls Tuff around 1.3 million years ago. Activity subsequently shifted to the present Yellowstone Plateau and culminated 640,000 years ago with the eruption of the >1000 km3 (240 mi3) Lava Creek Tuff and consequent formation of the 45 x 85 km (28 x 53 mi) caldera. Large volumes of rhyolitic lava flows (approximately 600 km3 (144 mi3)) were erupted in the caldera between 180,000 and 70,000 years ago, distributed primarily along two north-south alignments of vents. No magmatic eruptions have occurred since then, but large hydrothermal explosions have taken place during the Holocene, including near Yellowstone Lake. Uplift and subsidence of the ground surface is centered on two uplifted regions (the Mallard Lake and Sour Creek resurgent domes). Yellowstone is presently the site of one of the world’s largest hydrothermal systems including Earth’s largest concentration of geysers.

[…] Within the next few decades, large and moderate earthquakes and hydrothermal explosions are certain to occur. Volcanic eruptions are less likely, but are ultimately inevitable in this active volcanic region.

The large magma reservoir beneath Yellowstone may have temperatures higher than 1,475°F (800°C), and the surrounding rocks are heated by it. Because of this, the average heat flow from the Earth’s interior at Yellowstone is about 30 times greater than that typical for areas elsewhere in the northern Rocky Mountains. As snowmelt and rainfall seep deep into the ground, they can absorb enough of this heat to raise the temperature of the ground water close to the boiling point. Geyser basins and other thermal areas in Yellowstone National Park are places where hot ground water has risen close to the surface. Research drilling at Yellowstone in the 1960s confirmed that the ground water beneath many of the park’s thermal areas is very hot. At Norris Geyser Basin, water temperatures as high as 460°F (238°C) were recorded at depths of only 1,090 feet (332 m).

Because the boiling point of water increases with increasing pressure and pressure increases with depth, deep water can be hotter than boiling water near the surface. If the pressure that confines this deep water is reduced quickly, pockets of water may suddenly boil, causing an explosion as the water is converted to steam. Such activity drives the eruptions of geysers, like Old Faithful, which are repetitive releases of plumes of steam and water. Rarely, steam explosions are more violent and can hurl water and rock thousands of feet. In Yellowstone’s geologic past, such violent events, called “hydrothermal explosions,” have occurred countless times, creating new landscapes of hills and craters.

A recent and notable hydrothermal explosion occurred in 1989 at Porkchop Geyser in Norris Geyser Basin. The remains of this explosion are still clearly visible today as an apron of rock debris 15 feet (5 m) across surrounding Porkchop’s central spring. In the 1880s and early 1890s, a series of powerful hydrothermal explosions and geyser eruptions occurred at Excelsior Geyser in the Midway Geyser Basin. Some of the explosions hurled large rocks as far as 50 feet (15 m).

Much larger hydrothermal explosions have occurred at Yellowstone in the recent geologic past. More than a dozen large hydrothermal-explosion craters formed between about 14,000 and 3,000 years ago, triggered by sudden changes in pressure of the hydrothermal system. Most of these craters are within the Yellowstone Caldera or along a north-south-trending zone between Norris and Mammoth Hot Springs.

The largest hydrothermal-explosion crater documented in the world is along the north edge of Yellowstone Lake in an embayment known as Mary Bay. This 1.5-mile (2.6 km)-diameter crater formed about 13,800 years ago and may have had several separate explosions in a short time interval. What specifically triggered these very large events is not firmly established, but earthquakes or a pressure release caused by melting glaciers or rapid changes in lake level may have been a significant factor.

These very large and violent hydrothermal explosions are independent of associated volcanism. None of the large hydrothermal events of the past 16,000 years has been followed by an eruption of magma. The deeper magma system appears to be unaffected even by spectacular steam explosions and crater excavations within the overlying hydrothermal system.

Although large hydrothermal explosions are a feature of Yellowstone’s recent geologic history, most explosions in historical times have been relatively small and have left craters at most a few yards across. For example, in early 2003, a long linear fissure appeared on a hillside above Nymph Lake, north of Norris Geyser Basin, venting steam and throwing bits of rock onto the surrounding hillside. Although most hydrothermal explosions in the park are small, their remains can be noticed by observant visitors and attest to the nearly continuous geologic activity at Yellowstone.

From 1,000 to 3,000 earthquakes typically occur each year within Yellowstone National Park and its immediate surroundings. Although most are too small to be felt, these quakes reflect the active nature of the Yellowstone region, one of the most seismically active areas in the United States. Each year, several quakes of magnitude 3 to 4 are felt by people in the park.

Although some quakes are caused by rising magma and hot-ground-water movement, many emanate from regional faults related to crustal stretching and mountain building. For example, major faults along the Teton, Madison, and Gallatin Ranges pass through the park and likely existed long before the beginning of volcanism there. Movements along many of these faults are capable of producing significant earthquakes. The most notable earthquake in Yellowstone’s recent history occurred in 1959. Centered near Hebgen Lake, just west of the park, it had a magnitude of 7.5. This quake caused $11 million in damage (equivalent to $70 million in 2005 dollars) and killed 28 people, most of them in a landslide that was triggered by the quake.

Geologists conclude that large earthquakes like the Hebgen Lake event are unlikely within the Yellowstone Caldera itself, because subsurface temperatures there are high, weakening the bedrock and making it less able to rupture. However, quakes within the caldera can be as large as magnitude 6.5. A quake of about this size that occurred in 1975 near Norris Geyser Basin was felt throughout the region.

More likely in Yellowstone than a large explosive caldera-forming eruption is eruption of a lava flow, which would be far less devastating. Since Yellowstone’s last caldera-forming eruption 640,000 years ago, about 30 eruptions of rhyolitic lava flows have nearly filled the Yellowstone Caldera. Other flows of rhyolite and basalt (a more fluid variety of lava) also have been extruded outside the caldera. Each day, visitors to the park drive and hike across the lavas that fill the caldera, most of which were erupted since 160,000 years ago, some as recently as about 70,000 years ago. These extensive rhyolite lavas are very large and thick, and some cover as much as 130 square miles (340 km2), twice the area of Washington, D.C. During eruption, these flows oozed slowly over the surface, moving at most a few hundred feet per day for several months to several years, destroying everything in their paths.

The Yellowstone region has produced three exceedingly large volcanic eruptions in the past 2.1 million years. In each of these cataclysmic events, enormous volumes of magma erupted at the surface and into the atmosphere as mixtures of red-hot pumice, volcanic ash (small, jagged fragments of volcanic glass and rock), and gas that spread as pyroclastic (“fire-broken”) flows in all directions. Rapid withdrawal of such large volumes of magma from the subsurface then caused the ground to collapse, swallowing overlying mountains and creating broad cauldron-shaped volcanic depressions called “calderas.”

The first of these caldera-forming eruptions 2.1 million years ago created a widespread volcanic deposit known as the Huckleberry Ridge Tuff, an outcrop of which can be viewed at Golden Gate, south of Mammoth Hot Springs. This titanic event, one of the five largest individual volcanic eruptions known anywhere on the Earth, formed a caldera more than 60 miles (100 km) across.

The region’s most recent caldera-forming eruption 640,000 years ago created the 35-mile-wide, 50-mile-long (55 by 80 km) Yellowstone Caldera. Pyroclastic flows from this eruption left thick volcanic deposits known as the Lava Creek Tuff, which can be seen in the south-facing cliffs east of Madison, where they form the north wall of the caldera. Huge volumes of volcanic ash were blasted high into the atmosphere, and deposits of this ash can still be found in places as distant from Yellowstone as Iowa, Louisiana, and California.

Each of Yellowstone’s explosive caldera-forming eruptions occurred when large volumes of “rhyolitic” magma accumulated at shallow levels in the Earth’s crust, as little as 3 miles (5 km) below the surface. This highly viscous (thick and sticky) magma, charged with dissolved gas, then moved upward, stressing the crust and generating earthquakes. As the magma neared the surface and pressure decreased, the expanding gas caused violent explosions. Eruptions of rhyolite have been responsible for forming many of the world’s calderas, such as those at Katmai National Park, Alaska, which formed in an eruption in 1912, and at Long Valley, California.

If another large caldera-forming eruption were to occur at Yellowstone, its effects would be worldwide. Thick ash deposits would bury vast areas of the United States, and injection of huge volumes of volcanic gases into the atmosphere could drastically affect global climate. Fortunately, the Yellowstone volcanic system shows no signs that it is headed toward such an eruption. The probability of a large caldera-forming eruption within the next few thousand years is exceedingly low.