Originally printed in The Outcrop, September 2019

Increasing storage is an integral theme of Colorado’s 2016 Water Plan.  The Water Plan’s recommendations for carefully employing groundwater resources to help address the state’s future water needs focus on a measurable objective for future water storage of attaining 400,000 acre-feet[1] of additional storage by 2050.   Expanded surface-water storage remains the preferred infrastructure option of Colorado’s water managers in part because of an entrenched institutional mindset, but also in response to restrictions in Colorado water law.  The Water Plan, however, notes the importance of using innovative technologies such as aquifer storage and recovery to achieve this storage goal.

The occurrence and distribution of Colorado’s groundwater resources are inherently linked to the state’s geography and underlying geology.  Subsurface water storage in aquifers significantly reduces the financial, permitting, environmental, security, and socio-economic hurdles associated with construction of new surface water reservoirs.  Aquifers exist as natural capital infrastructure with storage, transmission, and treatment capacities.  Storing water underground avoids the massive losses to evaporation experienced by surface-water reservoirs in the semi-arid west, and greatly reduces the environmental impacts of changes in the natural flow of rivers and streams.

The concept of storing water underground has gone by many names. Aquifer recharge, formerly known as “artificial” recharge, is defined as any engineered system designed to introduce water to, and store water in, underlying aquifers whether the water is recharged at the surface or underground. Aquifer storage and recovery (ASR) adds the extraction component to the water being stored and both injection and recovery is typically implemented through wells.  Recently, scientific and engineering professional societies (e.g. American Society of Civil Engineers, National Groundwater Association) have been promoting the term managed aquifer recharge (MAR) as an umbrella term for a range of technologies to place water into the subsurface.  Managed aquifer recharge is the intentional recharge of water to suitable aquifers for subsequent recovery or to achieve environmental benefits; the managed process includes water quality considerations to assure adequate protection of human health and the environment. 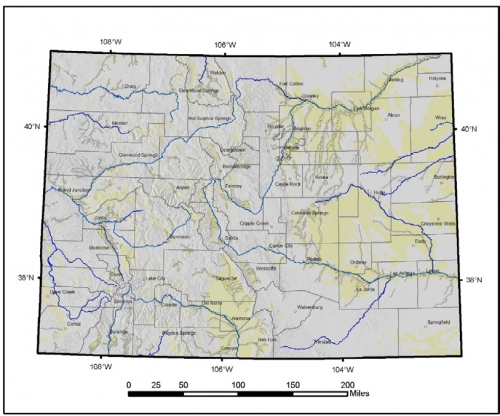 published by the Colorado Geological Survey (CGS), provides a comprehensive reference of the state’s groundwater resources summarizing the location, geography, geology, water quality, and hydrologic characteristics of its major aquifers.  The CGS is currently updating the Atlas as a digital, web-based product.   For the purposes of this article a brief overview of Colorado’s aquifers and aquifer systems is presented.

Alluvial deposits (Figure 1) consist of unconsolidated Quaternary age clastic sediments forming aquifers associated with the state’s major river systems. Alluvial aquifers rarely extend deeper than 100 feet and are in hydrologic connection with the stream system. Due to their high porosity and permeability, alluvial aquifers are generally the most productive aquifer type in the state. 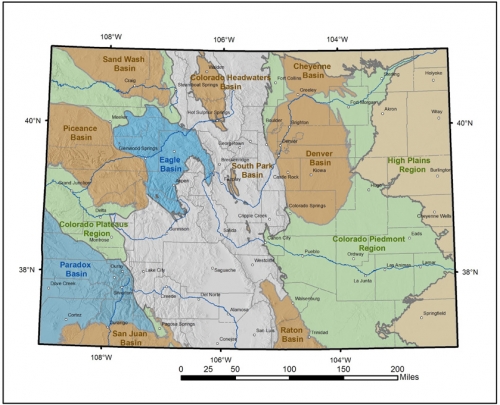 Aquifers in the mountainous region of central Colorado consist of either volcanic or crystalline rock or are associated with sedimentary rocks in intermountain valleys.  The mountainous region is the most geologically complex.  Within this region are deep valleys formed by Neogene faulting that are filled with complexly deformed sedimentary formations of many ages and areas of intense volcanic activity.  Fractured crystalline bedrock (igneous or metamorphic) is at or near the surface over large portions of Colorado’s mountainous region where it forms the only available aquifer. Crystalline rock aquifers consist of interlocking mineral crystals with no interconnected pore space to create porosity or permeability.  Groundwater only occurs and moves through fractures and faults crosscut into the rock. Because of this, groundwater production and storage capacity are generally low.

It’s easier to recognize and grasp the storage volumes available in a large surface-water reservoir than it is to visualize the vast potential groundwater reservoir beneath the surface. Activities related to ASR in Colorado have a long history.  As early as 1959, the General Assembly passed Senate Bill 336 to develop criteria for the proper management and operation of Colorado’s groundwater reservoirs focusing on areas of interest within the South Platte alluvium. It took 35 years, however, before the first rules governing aquifer recharge and extraction allowed water managers in the Denver Basin to start implementing ASR operations.  Reaction to the drought of 2002 led the Colorado Geological Survey (CGS) to investigate and publish a reconnaissance-level, statewide assessment of available storage capacities in the state’s alluvial and bedrock aquifers (Topper et al., 2004).  Their report identifies and ranks 13 unconsolidated alluvial aquifer systems and 24 consolidated bedrock aquifer systems throughout the state with potential storage capacities in excess of 100,000 acre-feet each, about the size of Elevenmile Canyon Reservoir in the foothills southwest of Denver. 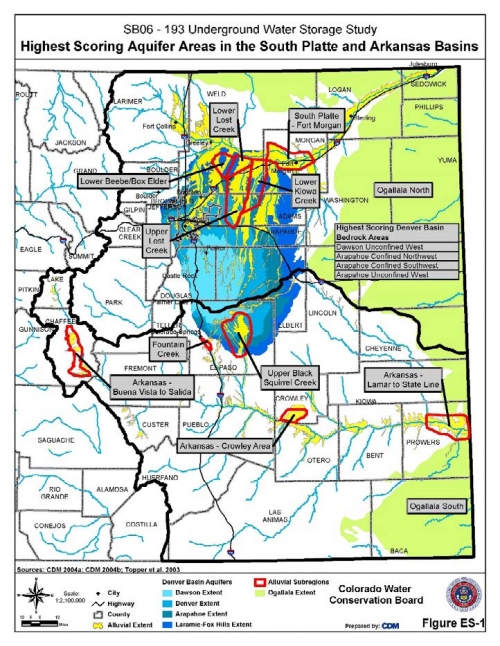 Identifying multi-purpose water storage options was again the focus of the General Assembly in 2016 when it passed HB16-1256, authorizing the lower South Platte River Storage Study. Of the 19 potential aquifer storage sites identified, 7 aquifer storage sites remained priority candidates after their screening process.  These include lower and upper Lost Creek, Badger/Beaver Creek, lower and upper Kiowa Creek, and lower and upper Bijou Creek. The analysis concluded that an ASR project gives a higher firm yield and better storage-to-yield ratio than a surface water reservoir of the same storage capacity.

Development of aquifer storage and recovery facilities, specifically using injection and recovery wells, in the U.S. has been on a rapid growth curve for the past twenty years with 125 wellfields in over 20 states (Pyne, 2016).  As of November 2016, Colorado had 6 different operating wellfields consisting of 45 ASR wells all in the Denver Basin.  MAR project applications are quite versatile given the many options of geologic environment, source of water, and intended use of the stored water.  Source water options for MAR include: 1) excess legally available surface flows, 2) stormwater runoff, 3) treated effluent, and 4) produced waters (by-product of oil & gas production).  The technology, location, design, permit requirements, and operation of an MAR system are dependent upon the primary water management objective(s).

Colorado water users have been very effective in operating aquifer recharge projects, predominantly in the South Platte and Arkansas River basins, to meet their legal obligations of replacing stream depletions resulting from out-of-priority groundwater pumping through implementation of augmentation plans.  Recharge amounts vary year to year, but peak recharge increased from 150,000 acre-feet before 2002 to 350,000 acre-feet in recent years. The number of recharge ponds increased from 100 to 700 in that same time frame.  Recharge facilities have also been constructed to protect or enhance wetland habitat, largely for waterfowl, and to help meet downstream endangered species obligations.  These projects, while meeting legal obligations, do not have a typical storage objective. 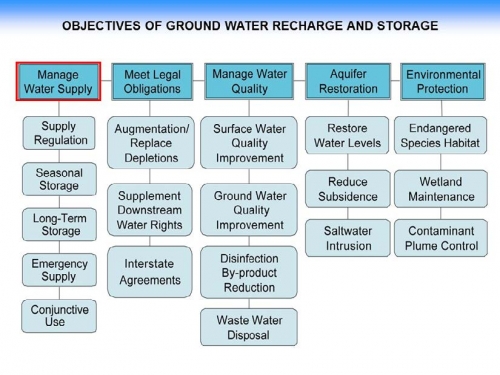 Until last year, the “administrative” Denver Basin was the only area within Colorado where the State Engineer promulgated rules and regulations for the permitting and use of waters “artificially” recharged and extracted.  Denver Basin groundwater is water within four successively overlying aquifers; the Dawson, Denver, Arapahoe, and Laramie-Fox Hills located within the 6,700-square mile structural Denver Basin between Greeley and Colorado Springs (Figure 6).  Centennial Water and Sanitation District initiated its ASR program in 1991 with a single Arapahoe Aquifer well used to evaluate the feasibility of long-term, high-volume storage of treated water and subsequent recovery of the injected water.  The initial testing verified that ASR would provide a significant, low-cost water storage option with no evaporation losses.  Since 1991, Centennial has continued operating ASR wells and has permitted and equipped 25 wells completed in the Denver, Arapahoe, and Laramie-Fox Hills aquifers of the Denver Basin.  As of 2019, Centennial has stored over 14,000 acre-feet of water in those aquifers underlying Highlands Ranch, Colorado.

Other municipal districts within the Denver Basin have also implemented ASR.  The Consolidated Mutual Water District drilled and completed six wells (2004 – 2006) specifically designed for ASR operations located adjacent to the Maple Grove Reservoir which ironically provide underground water storage directly beneath the existing surface water reservoir.  Colorado Springs Utilities equipped two wells for ASR, one in the Denver Aquifer, and one in the Arapahoe aquifer (2005 – 2006) at its Northgate Water Treatment Plant site. 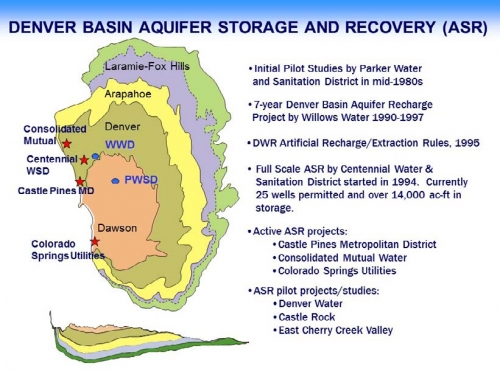 ASR has slowly evolved as an alternative water management strategy for increased water storage along the Front Range.  Castle Pines Metropolitan District, East Cherry Creek Valley Water & Sanitation District, and the Town of Castle Rock have all conducted ASR testing in existing Denver Basin wells.  With the completion of Denver and Aurora’s Water Infrastructure and Supply Efficiency (WISE) Project, several additional south metropolitan area water districts that rely primarily on groundwater are exploring the use of ASR.  Deliveries of treated, potable water from the WISE project typically occur during periods of low demand, usually requiring storage of the delivered water.  To meet those storage needs, Meridian Metropolitan District, Rangeview Metropolitan District, Inverness Water and Sanitation District, and Cottonwood Water and Sanitation District all are currently (2019) in the process of permitting and equipping existing Denver Basin wells for ASR.  Denver Water is also in the process of evaluating how ASR in the Denver Basin can be a part of its water supply and storage operations.

Recently, the Colorado State Engineer’s Office expanded the existing ASR Extraction Rules to include all non-tributary aquifers within the state.  While this opens the door for opportunities outside of the Denver Basin, regional or aquifer-specific determinations of nontributary groundwater have not been conducted by the state.  The statutory definition of nontributary groundwater makes it very difficult to receive a nontributary determination.  Given their hydrogeologic characteristics, however, nontributary aquifers lend themselves to long-term storage of water.

Designated basins offer the only other alternative for storage projects within unconsolidated alluvial deposits.  Due to the hydrogeologic character of the unconsolidated aquifers in these basins and their legal distinction, designated basins offer good locations to implement ASR.  The Colorado Ground Water Commission has recently promulgated new rules for Aquifer Storage and Recovery Plans that impose additional requirements which may also make it more difficult to implement MAR projects in designated basins.

Subsurface water storage in aquifers significantly reduces the financial, permitting, environmental, security, and socio-economic hurdles associated with construction of new surface water reservoirs.  The capital infrastructure already exists naturally and avoids massive evaporation losses.  State-sponsored studies have quantified numerous aquifers, both bedrock and alluvial, throughout the state with tens to hundreds of thousands of acre-feet of storage capacity.  While the viability of storing water in Colorado’s groundwater reservoirs has been studied for over 60 years, project implementation was not initiated until rules and regulations for aquifer recharge and extraction were promulgated for the Denver Basin aquifers, which is still the only area in Colorado implementing ASR.  While new rules open the doors for project implementation in nontributary aquifers throughout the state, obtaining a nontributary determination is extremely difficult.  The best storage opportunities are in alluvial aquifers due to their hydrogeologic characteristics and ease of implementation.  operations in tributary aquifers, however, have the potential to impact senior water rights, and the concept of transient storage has not been addressed in Colorado water law.  Achieving the additional storage goals in the Colorado Water Plan, including underground water storage, may require revising Colorado water law.

Ralf Topper (now retired) serviced as the senior hydrogeologist in both the Colorado Division of Water Resources and the Colorado Geological Survey.  He has earned advanced degrees in Geology (BS, MS) and Hydrogeology (MS) from CU-Boulder and Colorado School of Mines and has over 35 years of professional geoscience experience in both the private and public sectors.  He is a Certified Professional Geologist, a Geological Society of America Fellow, and an active member of both national and state groundwater societies.  Ralf has authored numerous papers and publications on Colorado’s groundwater resources including the award-winning Ground Water Atlas of Colorado.  Ralf and his wife, Karen, are long-term residents of Conifer (over 30 years) where he enjoys snowboarding, riding motorcycles, boating, hunting, and fishing.