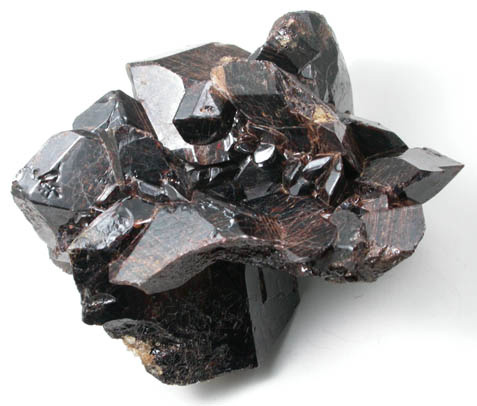 Titanite, CaTiO(SiO4) - also commonly reported as CaTiSiO5 - is a common accessory mineral in many types of igneous and metamorphic rocks. Also known as sphene, a name that has fallen out of favor, this calcium titanium nesosilicate is an important reservoir in the titanium geochemical cycle. Titanite has a distinctive crystal form that it flaunts, commonly appearing  as recognizable wedgeshaped crystals. Titanite has a dispersion value that gives it a high luster, lending some crystals an intense brilliance and fire. Because it is comparatively soft, it is not well-suited to jewelry, but can be a prized mineral specimen for collectors. On top of it all, the calcium coordination site is sometimes occupied by other cations, most famously, uranium. This, combined with a high temperature of crystallization and a low diffusivity for lead (Pb), make titanite one of the most important minerals for U/Pb geochronology. Because titanite is a central contributor to quantitative thermometry and barometry, it has played a critical role in deciphering igneous, metamorphic and ore-forming processes. Titanite is a titan among minerals!

The name of the mineral titanite is an obvious reference to the element titanium contained therein. Titanium was discovered in 1791 from ilmenite (FeTiO3) ore in 1791 by William Gregor and 1st named by Martin Klaproth, also in 1791, for the Titans of Greek mythology (Chaline, 2012). Martin Klaproth was also the one to apply the name titanite, in 1795. [The Titans were the 2nd generation of divine beings descended from the primordial deities Uranus (Father Sky) and Gaia (Mother Earth, for whom the science of geology is named). The Titans were twelve: six daughters and six sons, with a few names that are familiar to all geologists. The female Titans were Mnemosyne, Tethys, Theia, Phoebe, Rhea and Themis. The male Titans include Kronos, Oceanus, Iapetus, Coeus, Hyperion and Crius. The descendant (2nd and 3rd) generations of Titans also sport names that permeate geology: Helios, Eos, Atlas, Prometheus, Zeus, Hades and Poseidon]. 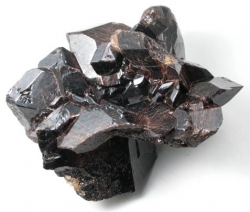 Titanite was previously known as sphene and that name is ensconced in the older literature. The name “sphene” was coined by Rene Hauy, in 1801. Sphene derives from the Greek, “sphenos”, which  translates to “wedge” (Bonewitz, 2005). In 1982, the International Mineralogical Association (IMA) recommended that official use of titanite replace the name sphene. In spite of being discredited, sphene is still an informal label amongst geoscientists and it is frequently encountered in the gem and mineral trade (Kohn, 2017).

Titanite is usually brown, but can be yellow, green or gray. Titanite has a resinous, brightly vitreous or adamantine luster, and this is one of its diagnostic properties (Johnson, 2002). In fact, titanite is among the very few minerals that enjoy a larger color dispersion than that of diamond (Bonewitz, 2005). Faceted titanite crystals are noted for a fiery brilliance, a character that makes titanite a valued addition to a mineral collection. Unfortunately, titanite is usually too brittle and too soft for use in jewelry (Bonewitz, 2013). Titanite can be discriminated from look-alike minerals by hardness: titanite is harder than sphalerite and softer than staurolite (Klein, 2002).

Titanite is a nesosilicate, in which isolated silica tetrahedra (SiO4 4-) are bonded to cations or anionic groups, not to other silica tetrahedra. In the case of titanite, the isolated silica tetrahedral are bonded to a kinked chain of corner-sharing TiO6 octahedra that parallel the a-crystallographic axis (Klein and Philpotts, 2013). Calcium ions occupy relatively large cavities with (unusual) 7-fold coordination (Johnson, 2002; Kohn, 2017). Substitution of the cationic site includes Na+ and the middle rare-earth elements (MREEs). Substitution for titanium may include Al, Fe, Mn, Mg, Nb and Zr (Klein and Philpotts, 2013, Johnsen, 2002). Although zirconium (Zr4+) substitution clearly occurs at the Ti4+ octahedral sites, some of the other substitutions, niobium (Nb5+) and tantalum (Ta5+), for instance, are more complicated (Liferovich and Mitchell, 2005). 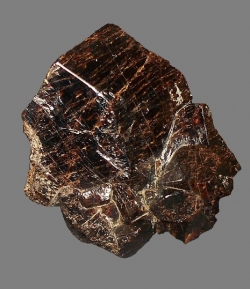 Titanite embodies a unique suite of optical properties. Titanite enjoys extremely high birefringence (2.0) and refractive index (1.3) values (Wenk and Bulakh, 2004). When observed in thin-section under plane-polarized light, titanite is easily seen due to its very high positive relief. The high birefringence makes titanite crystals appear the same brown color in plane-polarized and cross-polarized light (Klein and Philpotts, 2002). Euhedral or subhedral titanites, under most orientations in thin-section, are distinctive as diamond or wedge-shaped crystals. These characteristics make titanite a favorite of optical mineralogy and petrography students. As Wenk and Bulakh (2004) state, titanite “…cannot be mistaken in thin-section.” (p. 437).

Titanite has commercial value as a source of titanium, but deposits with enough titanite are rare (Klein and Philpotts, 2013). Titanium is used primarily as a metal and as a pigment. Titanium metal is well known as a material with a superior strength to weight ratio and corrosion resistance. These characteristics have made titanium the most important metallic component in aeronautical and aerospace applications. Sputnik 1 (1957), Vostok 1 with the 1st human in space (Yuri Gagarin, 1961) and all subsequent space flight vehicles, have depended upon titanium structural elements and engine parts. Today, titanium is used for more mundane applications like high-tech bicycle frames and, because it is biologically inert, is finding widespread application in medicine as artificial joints, heart valves, pacemakers and dental implants (Chaline, 2012). Titanium dioxide (TiO2) is used widely as a bright white pigment in paints and coatings, papermaking and plastics. Other industrial uses for titanium include enamels, glassmaking, ceramics, catalysts, welding and electronics (Chang, 2002).

One of the most interesting characteristics of titanite is its strength as a thermobarometer. It is especially useful because it preserves information at the high-end of the temperature range (~600°C to 1000°C). In 2006, Hayden, Watson and Wark established that the relative concentration of Zr4+ in synthetic and natural titanite is systematically related to pressure and temperature conditions. Since this work, the “Zrin- Titanite” thermobarometer has been demonstrated to be a robust tool with a large temperature and pressure range that finds application in a wide variety of rocks and tectonic settings (Kohn, 2017). 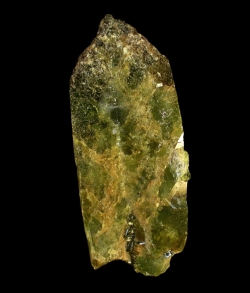 In addition to thermobarometry, titanite is also a reliable geochronometer. Although zircon is the rock star of the U-Pb dating world, titanite – along with monazite and baddeleyite - form a strong second line (Dickin, 2005). Titanite is useful for geochronology because it is widespread, it incorporates uranium into its crystal lattice (substituting for Ca2+), and it has a high closure temperature for Pb and other cations (Frost et. al, 2001; Engi et. al., 2017). Development of titanite as a geochronometer was first accomplished by Tilton and Grunenfelder in 1968. Since, titanite has been used to date many igneous and metamorphic rocks in diverse orogenic settings (Kohn, 2017; Dickin, 2005). Initial work on dating titanites concluded that Pb diffusivity is high above ~600°C, suggesting that titanite dates reflect cooling, not crystallization events. More recent work shows that Pb diffusivity in titanite is 2-4 orders of magnitude slower than previous experimental estimates, expanding the versatility of titanite as an archive of processes in the middle crust (Kohn and Penniston-Dorland, 2017). Linked to thermobarometry, titanite geochronology provides information about the P-T-t evolution of rocks in orogenic belts, a power enjoyed by very few mineral species (Engi et. al., 2017).

Important localities for titanite include the Kola Peninsula of Russia, where it is mined for titanium from a nepheline syenite. Other important localities include Austria, Madagascar, Canada, Mexico, Brazil, Sweden, Germany, Russia, Pakistan, Switzerland, Italy and Norway. In the U.S. titanite is found in abundance in the Adirondacks and Adirondack lowlands of Upstate New York, in New Jersey and in Riverside, California (Klein, 2002; Johnsen, 202; and Bonewitz, 2005).