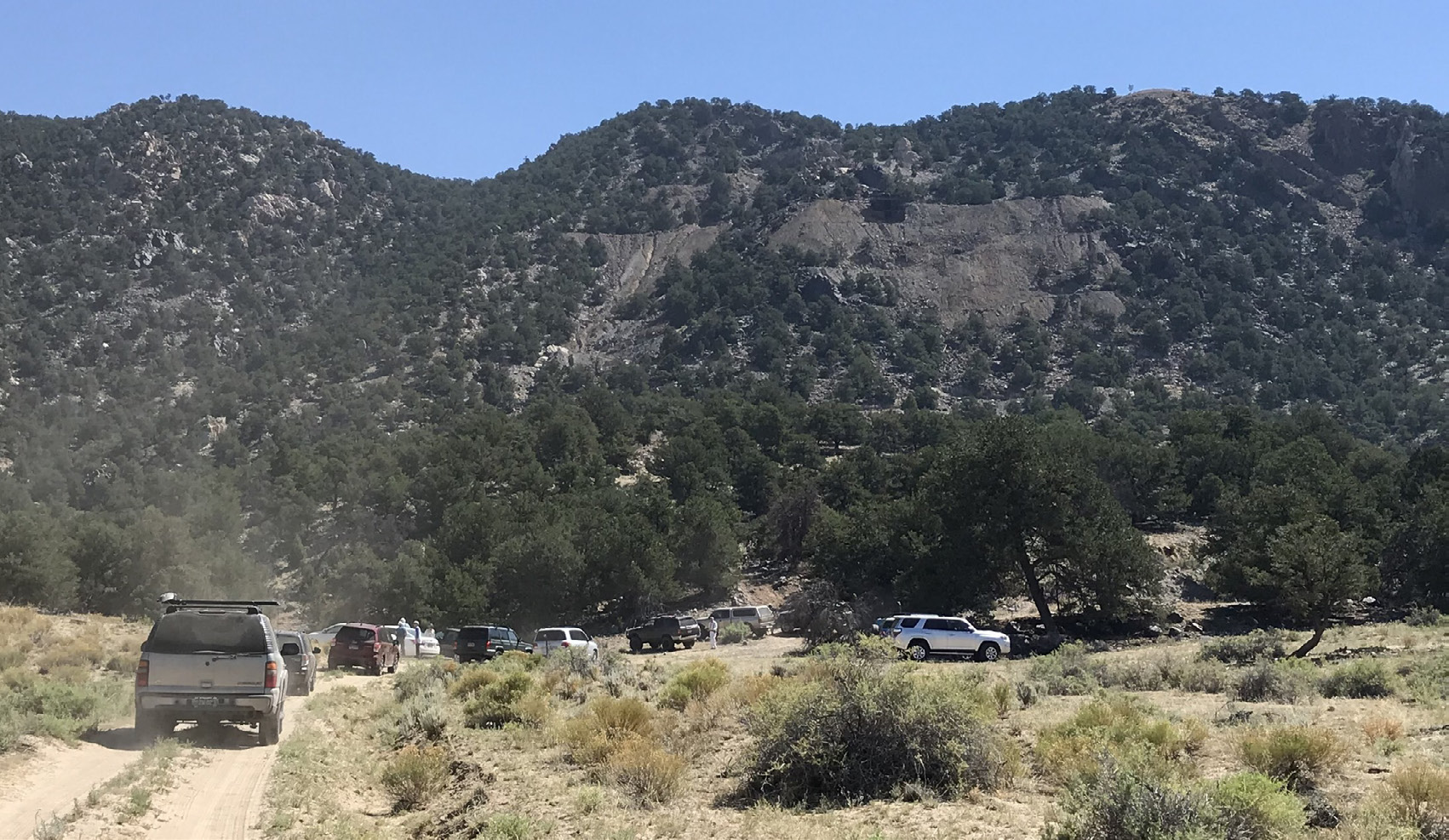 On the morning of Saturday July 1, a group of 30 field trip enthusiasts, from both RMAG and CMS assembled at the Safeway parking lot in Salida. Resting on the tailgate of a pick-up truck was a flat box of mineral samples belonging to CMS trip leader Don Bray. They were his best finds from over 30 years of exploring the Sedalia Copper Mine! “This is what you will find up there,” he said, describing each one in turn and passing them around for closer inspection. His collection included large garnet crystals, bladed stars of actinolite, crystals of sphalerite, malachite, azurite, chrysocolla, and many others.

Everyone’s eyes got big when he said, “Softball-size dodecahedrons of almandine garnet weathered from schist have been collected here. A real prize would be finding one of them.” We all took that as a challenge. After a lengthy discussion on safety, including eye protection when hammering, possible rock slides, and rarely seen snakes, we headed up the mountainside. Getting to the mine, about 12 miles from Salida, and about 300 feet above the parking area, required hiking up an abandoned mining road full of steep switchbacks built on loose talus.

RMAG trip leader, Nigel Kelly, faculty member of both CU Boulder and Colorado School of Mines, gave us a brief overview of the Sedalia mine’s geological origin. He said, “It is a metamorphic volcanogenic massive sulfide deposit, part of a mineral belt of Proterozoic age that crosses Colorado extending north to the Wyoming border.” Sedalia contains a complex mix of minerals metamorphosed to amphibolite facies. The mineralization that occurs at volcanic arcs is the modern analogue to these deposits. The schist was intruded by both volcanic fluids and late stage pegmatites. The pegmatites could be seen in outcrop having weathered to light colored knob-shaped forms having little to no vegetation cover.

The mine was discovered in 1881 and worked until 1923. It was the largest copper mine in Colorado. The primary target ore minerals were chalcopyrite, bornite, chalcocite, cuprite, sphalerite, cerussite and galena. Secondary copper minerals mined were mainly malachite and azurite with associated veins of chrysocolla.

The talus slope contained scattered ruins of a sluiceway made from now-weathered, heavy timber that enabled freshly mined ore to slide by gravity down to the base of the slope. Timbers also marked the openings of several now fenced-off mine adits, the cool air exiting theses were refreshing in the summer heat. Remains of a bunkhouse for miners and a mess hall were also evident on the property. In its day the manual work to develop the mine no doubt required great toil. The ruins are a testament to both the great effort of the miners and the history of the area.

Among the prizes of the day were a perfectly formed dodecahedron of almandine garnet and colorful crustaceans of chrysocolla. Both were found by Wendy Carley of CMS. The dodecahedron was not soft-ball sized as Don described that morning, but rather golf-ball sized. Nonetheless, all 12 crystal faces were clearly preserved. Congratulations to Wendy. 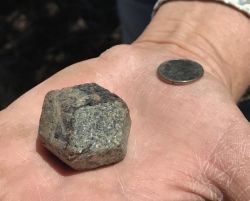 What impressed me most about the trip was the enthusiasm of the CMS members. Several that I spoke to were professionals completely outside the field of earth science that loved the thrill of finding minerals, being outdoors, and enjoying the mountain views, which were all around.

Special thanks for a great day go to Laura Johnson of the RMAG field trip committee for organizing the trip, and both Don Bray and Nigel Kelly for giving their time and sharing their knowledge and enthusiasm for the origin and history of the Sedalia Mine.